First, the answer to last week’s BONUS question: The haftarah verse found in the liturgy is Jeremiah 2:2, which is one of the Zichronot (Remembrance) Verses in the Musaf service on Rosh Hashanah.

This double portion ends the book of Numbers.  In fact, it pretty much concludes the action of the stories of the Israelites, since Deuteronomy is a one month long oration/retirement speech/exhortation delivered by Moses.  We are still tying up loose ends, also a characteristic of upcoming retirement (OK, in the case of Moses, death).  These include the legal technicalities of women’s vows, a brutal massacre of Midianites (and Bil’am) as revenge for their role in that nasty business at Pe’or, and a decision that the tribes of Reuben, Gad, and Manasseh can stay on the east side of the Jordan which they deemed especially good for cattle raising, as long as they will fight in the forefront of the armies conquering Canaan. (Can you imagine how Moses must have felt at this casual refusal of what he has so longed for and been denied – crossing the Jordan into the Promised Land?)  Interestingly, Moses was told he would die after he finished the task of massacring the Midianites, yet he did not delay.

In Chapter 33, we read a curious travelogue, a list of all the places visited by the Israelites in their 40 years of wandering, curious in that 14 pairs of verses are chanted to the melody used for the Song at the Seas, and in that there’s very little description besides “they journeyed from A and encamped at B.”  The borders of the land are then described and the leaders of the nation and tribes named.  The Levite cities are defined; including open area, fields, and vineyards as well as the city, each of these had an area of 25 (Rashi), 4 (Nachmanides), or 49 (Maimonides) million square cubits (1 cubit is about 1.5 ft.).                  (The Chumash, Stone Edition, p. 927). 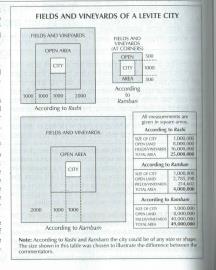 This leads into the establishment of 6 cities of refuge for those who kill someone unintentionally.  The Book of Numbers ends with another wrinkle to the story of the daughters of Zelophehad.  As always once a legal decision is promulgated, someone comes up with an unforeseen consequence.  Here, the consequence is scrambling the designated tribal lands if the daughters, or women in the future in this situation, marry outside the tribe and take their inheritance with them.  The solution: the daughters of Zelophehad were to marry within their tribe, and they did.  In the Talmud, this becomes a recommendation rather than a command.

The haftarah (Jeremiah 2:4-28, usually also 3:4, and, in some traditions, 4:1-2) starts where last week’s ended.  It is the second Haftarah of Rebuke (warning, admonition) before Tisha B’Av and describes how the Israelites’ disloyalty, i.e., vain and empty character, has led them to achieve emptiness.  “Their external discredit has followed their inner discredit” (N. Leibowitz, Studies in Bamidbar – Numbers – page 411).

Why Americans Should Never Be Allowed To Travel

The following are (selected) actual stories provided by travel agents:

I had someone ask for an aisle seats so that his or her hair wouldn’t get messed up by being near the window.

A client called in inquiring about a package to Hawaii.  After going over all the cost info, she asked, “Would it be cheaper to fly to California and then take the train to Hawaii?”

I got a call from a woman who wanted to go to Capetown.  I started to explain the length of the flight and the passport information when she interrupted me with “I’m not trying to make you look stupid, but Capetown is in Massachusetts.”Without trying to make her look like the stupid one, I calmly explained, “Cape Cod is in Massachusetts, Capetown is in Africa.”  Her response … click.

A man called, furious about a Florida package we did. I asked what was wrong with the vacation in Orlando. He said he was expecting an ocean-view room. I tried to explain that is not possible, since Orlando is in the middle of the state. He replied, “Don’t lie to me. I looked on the map and Florida is a very thin state.”

A nice lady just called. She needed to know how it was possible that her flight from Detroit left at 8:20am and got into Chicago at 8:33am.  I tried to explain that Michigan was an hour ahead of Illinois, but she could not understand the concept of time zones. Finally I told her the plane went very fast, and she bought that!

A businessman called and had a question about the documents he needed in order to fly to China. After a lengthy discussion about passports, I reminded him he needed a visa. “Oh no I don’t, I’ve been to China many times and never had to have one of those.” I double checked and sure enough, his stay required a visa. When I told him this he said, “Look, I’ve been to China four times and every time they have accepted my American Express.”
——————————-
http://www.jokebuddha.com/Cattle

Why New Yorkers Are Not Ranchers

A New York family bought a ranch out West where they intended to raise cattle. Friends came to visit and asked if the ranch had a name.
“Well,” said the would-be-cattleman. “I wanted to call it the Bar-J. My wife favored the Suzy-Q. One son liked the Flying-W, and the other son wanted the Lazy-Y. So, we’re calling it the Bar-J-Suzy-Q-Flying-W-Lazy-Y.”
“But where are all your cattle?”
“So far, none have survived the branding.”

Jews: Are we there yet?

Retirement speech jokes and one liners

“When a man retires and time is no longer a matter of urgent importance, his colleagues generally present him with a watch.” R C Sherriff

“The best time to start thinking about your retirement is before the boss does.” Anonymous

“When one door closes, another one opens, but we often look so long and regretfully at the closed door that we fail to see the one that has opened for us.” Alexander Graham Bell

“Forever, and forever, farewell, Cassius! If we do meet again, why, we shall smile; If not, why then this parting was well made.” William Shakespeare

Few men of action have been able to make a graceful exit at the appropriate time. Malcolm Muggeridge

There’s one thing I always wanted to do before I quit…retire! Groucho Marx

“I’ve lit the blue touch paper and found there’s nowhere to retire to.” Doctor Who

“For a long time it had seemed to me that life was about to begin-real life. But there was always some obstacle in the way, something to be gotten through first, some unfinished business, time still to be served, a debt to be paid. Then life would begin. At last it dawned on me that these obstacles were my life.” Alfred D. Souza
——————————-
http://www.algemeiner.com/2012/07/06/study-on-arranged-marriages-reveals-that-orthodox-jews-may-have-it-right/

(Speaking of marrying within the tribe…)

Study on Arranged Marriages Reveals that Orthodox Jews May Have it Right (excerpts) JULY 6, 2012 11:47 AM

For the past eight years, Robert Epstein, the Harvard-educated Senior Research Psychologist at the American Institute for Behavioral Research and Technology, has studied arranged marriages, interviewing more than 70 people from a variety of backgrounds, including some Orthodox Jewish couples. According to Epstein, feelings of love in arranged marriages tend to gradually increase as time goes on in the relationship, whereas in so called “love marriages”, where attraction is based on passionate emotions,  a couple’s feelings for each other typically diminish by as much as fifty percent after only eighteen to twenty-four months of marriage. In fact, according to a study conducted in India, arranged marriages appear to surpass love marriages in intensity at the five year mark, and to be twice as strong as love marriages within ten years.

The problem in part with love marriages, says Epstein, is that they’re based on a love that is perennially misunderstood, influenced by unrealistic media portrayals. “We grow up on fairy tales and movies in which magical forces help people find their soul mates, with whom they effortlessly live happily ever after,” wrote Epstein in a cover article for Scientific American MIND. “The fairy tales leave us powerless, putting our love lives into the hands of the Fates.” Such relationships can implode when the characteristic love of the newly married dissipates as time goes on.

Instead, Epstein advocates that relationships be built deliberately, through various practical exercises that he has distilled from his research on arranged marriage, as well as from more than 80 scientific studies conducted by other researchers. According to Epstein, relationships are organic and can be infused at will with deep commitment and lasting love, an empowering thought that he thinks will solve many marriage crises.

The premium placed on privacy in many Orthodox communities has forced Dr. Epstein to conduct most of his research on arranged marriages in non-Jewish setting like India and Pakistan.  In those countries, as in many Orthodox Jewish communities, the traditional definition of arranged marriages is blurred into a hybrid of sorts between arranged and love marriages. The parents or matchmaker suggest a date, and the young couple then exchange correspondence or go on several dates to decide themselves whether to marry or not. As opposed to forced marriages, “In arranged marriages, there is a choice, and it is respected” said Epstein in an interview with The Algemeiner. “The parents and the son or daughter make the decision together; everyone is interested in everyone else’s benefit.”

Others are not so fond of the idea.

Fraidy Reiss, founder of Unchained At Last, an organization whose stated mission is to “help women leave arranged marriages”, was in an arranged marriage herself, and claims that the matchmaking culture of current Jewish society is not conducive to informed decision-making. “They have to get married at a young age, with not enough experience, and they aren’t given the tools they need to make a proper decision…“It’s a business transaction. It’s not about love” she said, adding “The choice you make is not a choice at all. It’s societal coercion.”

Francine Kaye, a British divorce therapist self-styled as the Divorce Doctor, said to the Algemeiner, “When it is done properly, and both families are aware what the other’s beliefs and values are, there’s a lot to be said for arranged marriages.”