This week, I saw a 1952 Japanese film called “Ikuru” ((生きる, “To Live”), directed and co-written by Akira Kurosawa.  The protagonist, Kanji Watanabe, upon learning that he has stomach cancer and only several months to live, suddenly realizes that he has spent the past 30 years doing nothing of value, at a meaningless job as a passive City Hall bureaucrat.  He stops going to work and tries to fill the nothingness, first by a wild night on the town with a novelist, then by spending time (totally G-rated) with Toyo, a bubbly, young, former subordinate.  Through his talks with Toyo, Watanabe realizes that he can leave a meaningful legacy, yes, even as a City Hall bureaucrat.  He returns to work and succeeds in this as he literally fights City Hall to have a children’s playground replace a neighborhood cesspool.  He dies, blissful, sitting on a playground swing.  At Watanabe’s wake, his co-workers finally appreciate what he was able to get done and vow to fight as he had in those last months and not just shuffle paper and give people the runaround.  But it is a drunken vow, one they are incapable of fulfilling.  Kanji Watanabe’s legacy is the park, but it might have been much more.

Which brings me to this week’s Torah portion.

Nitzavim-Vayeilekh is a very short double portion, only 70 verses in all, but it’s pithy.  It includes the last day of Moses’ life, his official handoff to Joshua, and, except for a long poem, his final exhortation to the Israelites.   His key points: 1) All are entering into the covenant with the Lord, not just leaders, not just men, but also women, children, and” strangers” (resident non-Israelite s). 2) Obeying the Law is a personal responsibility.  Thus, everyone needs to, and can, learn the Law.  3) The Israelites will know what they should do, but obeying the Law is still their choice: prosperity or adversity, blessing or curse, life or death.  4) Straying will lead to disaster, national straying to national disaster.  But true repentance can lead to both a physical and spiritual return to the Land.

Moses writes down the Law (quite an undertaking) and hands it over to the Levites.  It is to be read aloud to everyone once every seven years on Sukkot.  That would have been an impressive marathon, but not a particularly good teaching method.  I think that’s why he resorts to the poem as an easier-to-remember distillation.

Like Kanji Watanabe, Moses knows he is about to die.  In Kanji’s City Hall, the co-workers’ promise at his wake soon goes by the wayside, except for a slight flicker of energy from one of them, though that apparently is blown out.  While Moses has done what he could for Israel, doggedly convincing the Lord to spare them at key moments (not that I’m comparing the Lord to Kanji’s City Hall.  Well, maybe a little.), he is still plagued by worries of his legacy, i.e., what will happen to the Israelites?  The Lord frankly tells him that the Israelites will backslide with disastrous consequences, but the door will always be open for them to repent and be redeemed.

This week, we read the seventh and final haftarah of consolation, Isaiah 61:10 – 63:9, about eventual brilliant redemption, with a lot of hopeful wedding imagery.  And, late Saturday night, the penitential season intensifies with Selichot, prayers for forgiveness, chanted in the distinctive High Holiday mode.   Next week: Rosh Hashanah and a new year.

Kanji:  I can’t afford to hate people. I don’t have that kind of time.

————————-
http://brainpickings.org/wp-content/uploads/2012/03/marginalized.jpg
Writing and copying medieval manuscripts was a real pain.  Scribes were wont to vent on occasion via comments in the margins.

Choosing a Profession (abridged)   By Terri

I remember the story about the old country preacher who had a teenage son, and it was getting time the boy should give some thought to choosing a profession.
The boy didn’t really know what he wanted to do – and he didn’t seem overly concerned about it.

One day, his father decided to try an experiment. He went into the boy’s room and placed on his study table these three objects: a Bible, a silver dollar and a bottle of whiskey…

“Now then,” the old preacher said to himself, “I’ll just hide behind the door here and when my son comes home from school this afternoon, I’ll see which of these three objects he picks up.

The old man soon heard his son’s footsteps as he headed back to his room. He deposited his books on the bed and spotted the objects on the table. With a curious set in his eye, he walked over to inspect them.

“Lord have mercy,” the old man whispered, “He’s gonna be a politician!”

Apart from values and ethics which I have tried to live by, the legacy I would like to leave behind is a very simple one – that I have always stood up for what I consider to be the right thing, and I have tried to be as fair and equitable as I could be.     Ratan Tata

My mother always told me that as you go through life, no matter what you do, or how you do it, you leave a little footprint, and that’s your legacy.    Jan Brewer

I’m only an actor. I’m not a writer. I’m not going to leave any legacy. All I’ve ever done is learn the lines and say them.     Ian Mckellen

I went for a job interview today and the manager said,” We’re looking for someone who is responsible”
“I’m your man” I replied. “In my last job, whenever anything went wrong they said I was responsible”

“We’re looking for someone responsible”
“Well hire me, and I’ll help you find that guy.”

“We’re looking for someone responsible.”
“Well hire me, then I’ll hire someone out of grad school for peanuts, and have him find you a responsible person. Then I’ll take the credit, you’ll give me a raise, and I’ll lay the grad student off just after he pays the down payment on his house!”

The preacher’s Sunday sermon was Forgive Your Enemies. Toward the end of the service, He asked his congregation, “How many of you have forgiven their enemies?”

“Mrs. Jones?” inquired the preacher, “Are you not willing to forgive your enemies?

“I don’t have any.” she replied, smiling sweetly.

“Mrs. Jones, That is very unusual. How old are you?”

“Oh Mrs. Jones, what a blessing and a lesson to us all you are. Would you please come down in front of this congregation and tell us all how a person can live ninety-three years and not have an enemy in the world?”

The little sweetheart of a lady tottered down the aisle, faced the congregation, and said “I outlived the old hags.” 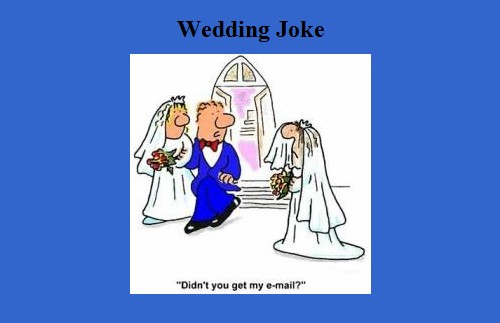