First, a shout out to our son Alan, who graduated from the Washington University School of Medicine in St. Louis a week ago.  WOOHOO!!  Hurray!! WHEEEEEEE!!! 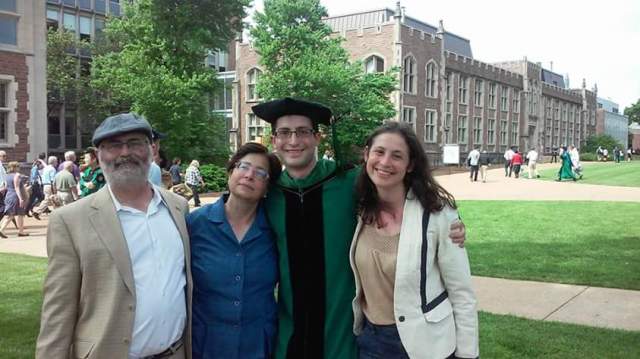 This is a busy 3-day weekend, not only because of Memorial Day, but because Shabbat is followed by 2 days of Shavuot (OK, 1 day for Reform).  First, we start reading a new book of the Torah, known as Numbers in English and as Bamidbar (in the desert), Bemidbar(in [the] desert of…i.e., Sinai), or B’midbar (ditto) in Hebrew.  “Numbers” is more suitable, at least as the name of this portion, since it’s filled with lots of numbers and counting.  It is now about 13 months since the Exodus.  The Lord orders a census of men aged 20 and up, le to bear arms, except for the Levites.  The total: 603,550.  The tribes are neatly arrayed in a square around the Tabernacle, 3 tribes per side.  Well, maybe not so neat, since there are 186400, 151450, 108100, and 157600 men per side.  We then read about the Levite males, who are counted from 1 month and up.  The Levites serve in place of the firstborn of the other tribes, and specific duties concerning the Tabernacle are assigned to each of the three Levitical houses.

Why a census?  Why now?  The easiest answer to both is to determine potential military strength.  The commentators provide additional insights.  For example, in verse 1:2, the command to count is actually “lift up the head” (s’u et rosh), which can imply exaltation (as inn Psalm 24, “Lift up your heads, o ye gates”) or decapitation.  In Gen. 40:13-21, this phrase is used both to describe the restoration of the wine steward to his station and to tell the baker he will be executed (head lifted up = off).  In Num. 1:2, the phrase appears neutral, which could imply that the Israelites could either be exalted (if they obey) or suffer greatly (if they don’t).  Then, verse 1:3 uses a different word for “count,” having the root P-K-D, and this is used for the rest of the counting.  It has a connotation beyond simply “count” or “number,” meaning to take special note of, as the Lord did for Sarah concerning having a son.  When you count, you are singling out individuals, which makes them each vulnerable.  Conversely, counting each one is like reviewing your precious possessions to enjoy them, or, more darkly, seeing anxiously who has and has not survived.

Shavuot, aka “Pentecost,” is a major holiday in celebration of a harvest, like Sukkot and Pesach.  We celebrate the harvest of the first fruits (in Israel) and the Revelation at Sinai.  The Torah readings are Exodus 19:1-20:23 (giving of the Ten Commandments) on the first day, Deut. 15:19 – 16:17 (holidays – also read on Shemini Atzeret and Pesach) on the second, and Numbers 28:26-31 (sacrifices) on both.  Some customs include all-night study sessions, decorating with flowers, reading the Book of Ruth, Confirmation (less of this nowadays), chanting a lengthy 11th century liturgical poem called Akdamut at services, and eating only dairy.  None of that is in the Torah.  In fact, the celebration of “matan Torah” (the giving of the Law) as a focus on Shavuot is nowhere in the Torah.  Even the date of Shavuot is not clear.  Today, we agree on the 6th of Sivan, 7 weeks (whence the name, “Shavuot” meaning weeks) after the second day of Pesach.  But the Torah, instead of a specific date, as it does for the other holidays, says in Deut. 16, “9 You shall count off seven weeks; start to count the seven weeks when the sickle is first put to the standing grain. 10 Then you shall observe the Feast of Weeks…” and in Lev. 23, “15 And from the day on which you bring the sheaf of elevation offering — the day after the Sabbath — you shall count off seven weeks. They must be complete: 16 you must count until the day after the seventh week — fifty days; then you shall bring an offering of new grain to the Lord. “You see the ambiguity (which Sabbath?).  This was hotly debated by Pharisees and Sadducees, along with other calendar matters, about two millennia ago.  The Pharisees won.

An accountant is having a hard time sleeping and goes to see his doctor. “Doctor, I just can’t get to sleep at night.” The Doctor replied “Have you tried counting sheep?” The accountant stated “That’s the problem – I make a mistake and then spend three hours trying to find it.”
————————-

Ah, the good old days.  US, 1790-1840: These early censuses were only a head count that identified the head of household and the number of people in the household, both slave and free.  Starting in 1850, census questions got increasingly intrusive, eventually prompting the cartoon below (↑ Saturday Evening Post, 18 August 1860, reprinted in United States, Bureau of the Census,).

The Children’s Bible in a Nutshell (excerpt)
Another important Bible guy is Moses, whose real name was Charlton
Heston. Moses led the Israel Lights out of Egypt and away from the
evil Pharaoh after God sent ten plagues on Pharaoh’s people. These
plagues included frogs, mice, lice, bowels, and no cable.

God fed the Israel Lights every day with manicotti. Then he gave them
His Top Ten Commandments.
These include: don’t lie, cheat, smoke, dance, or covet your neighbor’s
stuff.
Oh, yeah, I just thought of one more: Humor thy father and thy mother.
————————-
http://eigenblogger.com/2012/05/

10. You choose your shul based on which one is serving Starbucks

9. You proudly stay up all night to show your enthusiasm for Matan Torah, then you pass out during actual Torah Reading

8. You have a strange sacrilegious feeling when eating lasagna, cheesecake and ice cream after kiddush

7. Someone has to mention the “Everyone’s a little bit lactose intolerant” argument

6. First time anyone on earth has ever turned to the Kosher Palette’s “Dairy Section”

5. Must roll eyes when anyone tries to explain the modesty of Ruth’s late night visit to Boaz

4. No one is using their fine china

3. You notice people in supermarkets trying to gauge how many ice cream sprinkles is enough for 13 people

Quotes about the Ten Commandments

Say what you will about the ten commandments, you must always come back to the pleasant fact that there are only ten of them.

Accuse a person of breaking all Ten Commandments, and you’ve written the promo blurb for the dust cover of his tell-all memoir.

When you hear people demanding that the Ten Commandments be displayed in courtrooms and schoolrooms, always be sure to ask which set. It works every time.