Sukkot starts Sunday night. Before that, though, we read the penultimate Torah portion of the annual cycle, Ha’azinu, which contains the 43-verse long song (or poem) Moses was told to write in last week’s portion. It vividly describes the relationship between Israel and the Lord. The people are called a perverse and twisted generation (v. 5), a vile and unwise people (v. 6), fat and kicking (v. 15), contemptuous (v. 15), provoking (v. 16 et alia), angry (v. 19), lacking discernment (v. 28), venomous (v. 33). They are “a generation of reversals, children whose upbringing is not in them.” (v. 20). The Lord’s judgement and consequent vengeance and retribution will include fire, demons, famine, the sword, dispersion, and so on. Finally, though, in the last several verses, there is redemption for the people and retribution upon their foes. After this searing peroration, far beyond a scolding, Moses sums up (v. 46-7): Learn and follow the Torah, and teach it to your children. It matters. It is your life, and it will enable you to survive in the Promised Land. Next for Moses: Mount Nebo, a look at the Promised Land, and death.

The haftarah, too, is a song or poem, also read on the 7th day of Pesach and largely found in Psalm 18. It is David’s song of thanksgiving after being saved from Saul. Like the Torah reading, it contains vivid imagery, but, ironically, may lull you to sleep upon listening, since haftarot that are poems tend to be long, contain obscure language, and are musically kind of sing-song.

As for Sukkot, the first two days have exactly the same Torah reading for both first and second scrolls, and primarily deal with sacrifices and other holiday rituals. Those pertaining to Sukkot are found in verses 23:33-6 and 39-43 and include living in booths (sukkot) and taking the lulav and etrog (citron). The lulav is made up of a palm branch, willow twigs, and myrtle twigs. Interestingly, “in the fifth-century B.C.E. Nehemiah tells the Judeans to celebrate Sukkot in Jerusalem with ‘olive leaves, and oil tree leaves, and myrtle leaves, and palm leaves, and the leaves of an ets avot.’ No fruit is on his list at all.” And the etrog in the Torah is literally “fruit of a beautiful tree” or “beautiful fruit of a tree” and could have been anything tree fruit ripening at the time, like a pomegranate. The rabbis in the Mishnah (compiled in the early 3rd century C. E.) chose the citron because of its fragrance. [Source: http://forward.com/articles/184150/is-the-fruit-of-leviticus-really-an-etrog/]

I will not deprive you who are long-time readers of the next Sukkah Saga installment. We’ll be putting it up on Sunday morning and I’ll let you know next time how it goes.
Shabbat shalom and an early Hag Sameach (happy holiday),
Irene
————————–
https://www.washingtonpost.com/entertainment/style-invitational-week-1078-hyphen-the-terrible–neologisms-plus-winning-parodies/2014/06/26/949e4e50-fb4d-11e3-b1f4-8e77c632c07b_story.html
This is from a Washington Post Style Invitational contest in which the challenge was to write a song about a stage or screen musical — set to the tune of a song from a different musical. The misery described below seemed to fit the harsh words of most of Ha’azinu.

Aboard the ship the slaves are rowing,
We don’t know where they are going, but we surmise
Everyone dies.
Javert, it seems, has quite a passion
For giving Valjean a lashin’ for stealing ryes —
Everyone dies.
And when they start to sing
It won’t mean a thing —
They sing everything,
And the songs they sing
Tug at every string
So we hope you bring
Along Puffs for your eyes!

The women turn to prostitution,
The men start a revolution, say their goodbyes,
Everyone dies.
They build a barricade of wicker,
They should’ve used something thicker.
It’s no surprise
Everyone dies. (Rob Cohen, Potomac, Md.)
————————–
http://www.familyfriendpoems.com/poem/messy-room-by-shel-silverstein
Messy Room
By Shel Silverstein More Shel Silverstein

Whosever room this is should be ashamed!
His underwear is hanging on the lamp.
His raincoat is there in the overstuffed chair,
And the chair is becoming quite mucky and damp.
His workbook is wedged in the window,
His sweater’s been thrown on the floor.
His scarf and one ski are beneath the TV,
And his pants have been carelessly hung on the door.
His books are all jammed in the closet,
His vest has been left in the hall.
A lizard named Ed is asleep in his bed,
And his smelly old sock has been stuck to the wall.
Whosever room this is should be ashamed!
Donald or Robert or Willie or–
Huh? You say it’s mine? Oh, dear,
I knew it looked familiar!
————————–
http://www.kappit.com/tag/poetry-jokes/2/
Poetry Jokes

He recited verse from the bench because he was a poetic justice.

It’s an original poem
False. All of these words have been used before.

What do you call an aardvark that writes poems?
A bardvark!

A sentence
will always look
like poetry
if you
hit enter
a lot
————————–
http://www.jr.co.il/humor/sukkot03.txt
All Shook Up

To hear a clip visit:
http://shlockrock.com/stream/Purim_Torah/All_Shook_Up.mp3

Well I’m blessin’ this thing it looks like a tree.
I’ve got my esrog the Torah calls it a Pree
Seven Days a year people bless with me
It’s my lulav, it’s all shook up.

Right before Succos people go and meet.
Buy a lulav and esrog right off a the street.
Kids seem to think it’s a real big treat.
When their lulav, gets all shook up.

Well the aravos1 look nice and hadasim2 fine.
The esrog smells like a lemon or a lime.
I go to Shul put my lulav in hand.
My friends say they’ve got the finest in the land.

Well keep the leaves cool or they will rot.
Pitom3 off the esrog and kosher it’s not.
Follow these rules and you will use it a lot,
It’s your lulav, it’s all shook up.

Well some shake to the right and then to the left.
In the middle of Hallel4 is when it’s done best.
No matter how you shake it when Hoshana Rabba’s5 here.
Don’t need it anymore buy another next year 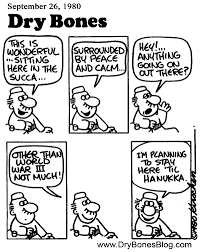