Except for the Torah readers assigned to chant Parashat Tzav tomorrow, I doubt anyone is really thinking a whole lot about its contents, since Pesach (Passover) starts Monday night and most of us are preoccupied with the requisite cleaning and food.  But Tzav fortuitously ties in to both.  First, we read about cleaning the altar each morning.  The assigned priest, wearing decent but plain linen vestments, cleans up the ashes from the sacrifices that were burnt completely, the olot.  He then changes into more utilitarian garments and takes the ashes out of the camp. As I noted here 5 years ago, “(w)e can infer from this that (1) one must start fresh each day and not let yesterday’s ashes pile up; (2) the gathering and disposal was handle with care, since they were, after all, from one of the holiest types of sacrifices; and (3) taking out the trash is not only necessary but important. In fact, it is written in the Mishnah that this task was considered a great honor among Temple priests and had to be assigned by lottery.

Then, we get into more detail concerning the sacrifices, i. e., the burnt, meal, sin, guilt, and well-being offerings, and those to be offered as part of the ordination of Aaron and his sons.  There are specific instructions about what to do and who gets to eat what from the sacrifice (no blood or fat).  While the Torah focuses here on the mechanics, the Mishnah (Tractate Zevachim) is particularly concerned with the intent of the priest during the process; the wrong intent can invalidate the sacrifice.

At the end of the Torah portion, Moses finally ordains Aaron and his sons in an involved ritual including the special vestments, sacrifices, blood, and anointing oil.  For seven days, Aaron and his sons remain at the entrance to the Tent of Meeting, a week of expiation, during which they eat the food given to them from the sacrifices. This is the last time Moses acts as both priest and political leader, and you have to wonder if he’s at all nervous about turning a large chunk of duties over to Aaron and his sons after the Golden Calf incident.  In fact, the shalshelet cantillation sign, which signifies hesitation and occurs only 4 times in the Torah, is used in 8:23, at the height of the ordination ceremony.

This Shabbat is also Shabbat HaGadol (“the great Sabbath”), the one right before Pesach.  There is no additional Torah reading, but there is a special haftarah, which prophesies that the reconciliation between parents and children will bring about the messianic age.  Before we started remodeling rabbis as ministers, making them give a weekly sermon, this Sabbath was one of only two during the year on which the rabbi gave a sermon (quick, what’s the other one?), on the laws of Pesach.

Ah yes, Pesach.  We are supposed to rid our abodes of chametz, which technically is “any food product made from wheat, barley, rye, oats or spelt that has come into contact with water and been allowed to ferment and ‘rise’.” Chametz is also symbolically linked to pride (being puffed up, get it?), so getting rid of chametz is a means of increasing your humility.  But trying to rid one’s house of all chametz can be carried to extremes if one conflates chametz with schmutz (dirt). I have read of Legos placed in a mesh bag and laundered to get rid of possible crumbs on crevices.  In the last several years, however, I’ve seen articles encouraging a moderate approach.  An article in my own shul’s newsletter declared that if we’re spending more than a day getting rid of chametz, it’s too much.  Debra Nussbaum Cohen’s 2011 essay, The Passover Cleaning Season Is Upon Us, and the link there to advice from Rabbi Chaim Pinchas Scheinberg are also worth looking at.

Because of late night sedarim with 4 cups of wine, attendance at services tends to be light the first two days.  My mother, z”l, used to tell us that Rabbi Goodblatt would give the 2nd day sermon in Yiddish, there were so few totally English speaking attendees. Anyhow, the Torah readings for the first day are Exodus 12:21-51 (the laws of Pesach and the Exodus, what else) and Numbers 28:16-25 (about the Pesach sacrifices, of course) and for the second day, Leviticus 22:26 – 23:44 (harvest festivals) and the same section from Numbers. 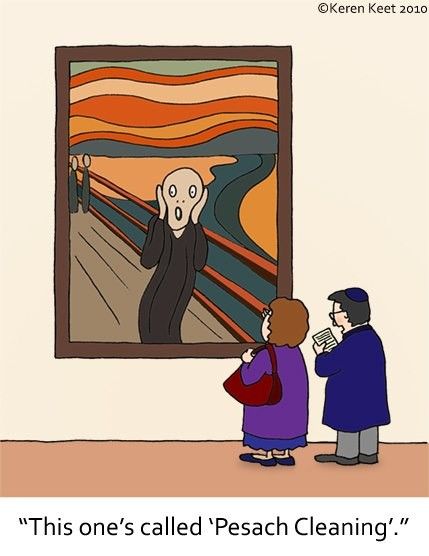 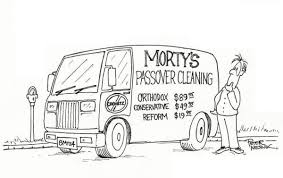 Submitted by Sam S., Birmingham, Ala.

A boy read a restaurant sign that advertised fat-free French fries.  “Sounds great,” said the health-conscious boy. He ordered some.  He watched as the cook pulled a basket of fries from the fryer. The potatoes were dripping with oil when the cook put them into the container.  “Wait a minute,” the boy said. “Those don’t look fat-free.”  “Sure they are,” the cook said. “We charge only for the potatoes. The fat is free!”

A rule of thumb for preachers: If after ten minutes you haven’t struck oil, stop boring!

The pastor was greeting folks at the door after the service. A woman said, “Pastor, that was a very good sermon.” The pastor says, “Oh, I have to give the credit to the Holy Spirit.” “It wasn’t THAT good!” she says.

Church of England to ordain Rabbis

Written by Steddyeddy
Story written: 11 February 2009 [yes, it’s a spoof!]
In their continuing efforts to appear non-discriminatory and anti-racist, the Synod of the Church of England has decided to allow the ordination of Rabbis for the first time.

Continuing on from the banning of churchmen who might be members of the BNP [the far-right British National Party. IGP], the church authorities decided that it was time the Church of England showed its true colours.

He continued to explain that because the good old bean Archbishop Rowan Atkinson had a beard, and many Rabbis also exhibit this form of facial growth, both the church and synagogue had a lot in common. Not to mention the seats, doors and singing of holy songs. Also, he felt that Rabbis might be well placed to comment on the Bible, especially the Old Testament.

He confirmed that the Church of England now has plans for the future ordination of Imams, Gurus and even that extremely nice Dalai Lama chap with the lovely smile, although he could do with ditching the NHS glasses.

Tom Cruise was said to be devastated that there were no plans to ordinate aliens.
—————————-
https://www-users.cs.york.ac.uk/susan/joke/laura.htm

Question for Dr. Laura:
When I burn a bull on the altar as a sacrifice, I know it creates a pleasing odor for the Lord – Lev.1:9. The problem is my neighbors. They claim the odor is not pleasing to them. Should I smite them?

The Joys of Parenting (selections)

Gloria Fallon
My 7-year-old daughter asked me twice today “what poison would kill someone the fastest?” and now I’m wondering if I’ve underestimated her.

Jenny Pentland
I just asked my 8yo to quit yelling and he said, “I’m NOT yelling. This is my voice and all my life I’ve been whispering. Now I’m free!”

Julius Sharpe
According to my kid, the perfect amount of time to stay at the park is five more minutes.

kelly oxford
5 year old is at my Gram’s memorial. She’s pissed that Gram didn’t show up.