The holiday season is actually drawing to a close, but there are still a couple of special days to get through.

The seventh and last day of Sukkot is known as Hoshana Rabbah (“Great Hoshana/Supplication”). It’s your last opportunity to affect the fate that was more-or-less sealed for you on Yom Kippur. what you have been sealed for this year (a sort of last chance “do over” after Yom Kippur).  It’s also the last day for processing with the lulav and etrog.  There are seven processions, each with its own set of chanted verses, so it takes a while (I’ve done this twice).  Then willow branches are beaten against the floor (see also http://thetorah.com/the-ritual-of-hoshana-rabbah/) five times.  My synagogue has the odd custom of then throwing the branches up on top of the ark; no one seems to know where this custom came from.

The next day is Shemini Atzeret (8th (day of) Assembly), a distinct, Biblically ordained holiday. In the Midrash, it is written that Shemini Atzeret represents the intimacy between God and Israel, while Sukkot represents the relationship between God and humanity. Geshem, the prayer for rain (in Israel) is chanted.  Note that we are praying for rain at the start of Israel’s rainy season; that is, we want normal rain at the normal time.  The Torah readings are Deut. 14:22 – 16:17 and Numbers 29:35 – 30:1 concerning holiday observances and sacrifices. Shemini Atzeret gives us a last moment to appreciate the holidays before they end.

Immediately following Shemini Atzeret (or coincident with it in Israel and in Reform synagogues), we celebrate Simchat Torah (Rejoicing of the Torah), on which we finish the annual Torah reading cycle and start all over again, with singing, parading with Torah scrolls and flags, dancing in the street, schnapps, and the like Unlike our other holidays, Simchat Torah is not a celebration of a harvest, nor of some historical or spiritual happening.  It merely marked the end of the Torah reading cycle.  It is post-Biblical, and customs evolved over centuries.  Dancing dates to the 1st century C.E. Beginning to read Genesis immediately was done in the 14th century, and the processions with all the Torahs at night, followed by a reading, was common by the 16th century. In the morning, we read from three scrolls.

The first scroll reading, V’zot HaBracha (Deut. 33:1-34:12), contains Moses’ final words to the Children of Israel, tribe by tribe, except for Shimon, which seems to have vanished.  Moses is kinder than Jacob was to his sons on his death bed.  The aliyot, except for the one at the very end of Deuteronomy, are typically read over and over and over until everyone has had an aliyah.  The person honored with the last aliyah of the Torah was thus was originally called the Chatam Torah, the Sealer of the Torah.  This was later transmuted into Chatan Torah (bridegroom of the Torah) with a corresponding Chatan Bereishit for the second scroll aliyah, Genesis 1:1 – 2:3. Synagogues in which woman are called up maybe instead refer to Kallat (bride of) Torah or Bereishit. Finally, the person who will chant the haftarah is called for the maftir aliyah (same section from Numbers as on Shemini Atzeret), read from a third scroll.  The haftarah is Joshua 1:1-18 (1-9 for Sephardim). Thus, while our readings are full of endings (the death of Moses, the end of the Israelites’ journey, the completion of the Torah cycle), we end with fresh beginnings: Creation, and the anticipated entry of the people into the Promised Land, and a new year,

As I promised, here’s a partial view of our decorated sukkah:

10. You go to Grand Central to be in a crowd of people.
9. You bring a flask to the office.
8. You start dancing with the members of your firm.
7. For the girls – you don’t actually work you just watch the men.
6. For lunch you have kugel and chicken.
5. The niggun (wordless tune) you were singing at 3:00 AM at Carlebach keeps popping into your head.
4. While drinking water you wish others a L’Chaim.
3. or the girls – you change outfits during work.
2. You want to take a nap at 5PM.
1. You start counting down until next Simchat Torah.
——————- 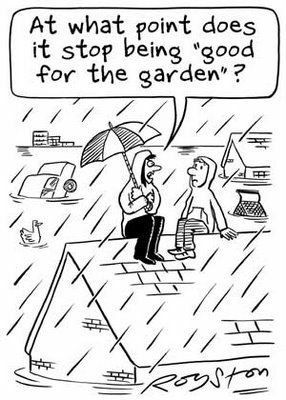 7. [God creating the kangaroo]
“Okay how about like an alive backpack that jumps around” By Licensed Esthetician

11. [God creating praying mantis]
Make an insect that does karate
Angel: k
Now make it bite her husband’s head off
Angel: dude we need to talk By Bownuggets

Answers Given in a Bible Knowledge Test

To celebrate the end of one year and the beginning of another, I’ve put together a selection of literary quotes on beginnings, middles, and endings. I hope you enjoy them.