This week’s Torah portion, Ki Tavo, starts cheerfully and gets increasingly dark.  We first read about ceremonial offerings to be brought by the Israelites in their new land.  As I noted last year (2014), “First, we read instructions for the offering of the first fruits, which Maimonides tells us was a really happy event, with growing parades of travelers to Jerusalem, festive baskets to carry the offerings, recitation of the same ceremonial words (“My father was a wandering Aramean…”) acknowledging Who was in the end responsible for their goodies, and lots of music and singing.  Sounds like fun.  Donation of the tithes for the Levites, resident aliens, orphans, and widows, is done with similar ceremony.  This enables one to give mindfully.”

Next, the people are told to write down the law on plaster-coated rocks, a sizeable task but not as labor-intensive as carving.  Biblical billboards.  This method was used by ancient Near Eastern rulers to boast of their achievements, as in Shelley’s poem, Ozymandias:

“…And on the pedestal these words appear:
`My name is Ozymandias, King of Kings:
Look on my works, ye mighty, and despair!’
Nothing beside remains….”

Textual images are still positive: We are told three times within several verses that the land flows with milk and honey.  An altar to be built must be made of unhewn stones (cf. the command to build the Temple without iron implements – even the tools must be those of peace).  In Israel in 1999, I saw a Canaanite prayer circle built of unhewn stones, still pretty much intact after 6,000 years.

Imagery starts to get darker.  After crossing the Jordan, the tribes are to assemble on Mount Gerizim and Mount Ebal, six tribes on each.  The Levites, in the valley between, are to call out a series of 12 curses, to each of which the people respond “Amen!” These curses end with 27:26,”Cursed be he who will not uphold the terms of this Teaching and observe them. — And all the people shall say, Amen.”

There are blessings, too, a series of rewards soothingly promised as a consequence of obedience – the usual rewards, like fertility, abundance, prosperity, the fear (or respect?) of the other nations, and being the Lord’s holy nation.  It is not difficult to describe the blessings.

But there follow 55 verses of very graphic, detailed curses known as the Tochachah (warning, admonition), which are traditionally chanted by the Torah reader very quickly in an undertone.  We read the minor Tochachah in Leviticus 26:3-46  and I compared the two last year (2014).  The curses in Deuteronomy are much worse, not just because of the details, but because they are uniformly horrible, while the ones in Leviticus only progress in severity in steps if disobedience continues.  In Leviticus, this is like a parent trying to train a child to behave, resorting to harsher punishments as deemed necessary.  In Deuteronomy, everything is laid on the line at once, like communicating with a more responsible teen or adult.  The curses encompass political subjugation and dispersion, starvation, cannibalism, destruction, condemnation by others, disease, and constant futility (someone else will lie with your betrothed, you’ll build a house and another will live in it, you’ll plant olive trees and vines but get no oil or wine from them, etc.).

“…you shall find no peace, nor shall your foot find a place to rest. The Lord will give you there an anguished heart and eyes that pine and a despondent spirit. 66 The life you face shall be precarious; you shall be in terror, night and day, with no assurance of survival. 67 In the morning you shall say, ‘If only it were evening!’ and in the evening you shall say, “If only it were morning!” — because of what your heart shall dread and your eyes shall see.”

As I wrote here 5 years ago (2010), “Another translation of v. 66, more exact and even more terrifying, is outright insanity: ‘And your life will hang before you, and you will be frightened night and day, and you will not believe in your life.’  What a nightmare. (See R. Avi Weinstein’s comments, ‘The Worst Curse Is To Lose All Control’ at http://www.myjewishlearning.com/texts/Bible/Weekly_Torah_Portion/kitavo_hillel2000.shtml).”

After all that, Moses reminds the Israelites of all the miracles they’ve experienced, though he has his doubts about their ability to appreciating them. The portion ends on a begrudgingly positive note, that if the people actively the Lord’s covenant, they will succeed.

The haftarah, Isaiah 60:1-22, is the sixth Haftarah of Consolation, full of light, both physical and divine radiance.  It is indeed consoling to read in light of the horrors of the Tochachah.

We are approaching the end of Elul and the beginning of a new year, Rosh Hashanah.  At a late Saturday night service tomorrow, we’ll read Selichot, communal prayers asking for forgiveness, a preview to the High Holy Days.

May your avocados never ripen.

May you spend your life in airports that are distinctly lacking in power outlets.

May your favorite pen run out, and may you subsequently discover that it has been discontinued.

May your coffee always be decaf.

May the first Google result for your name forever be that bad poetry blog you wrote when you were 16.

It’s another attempt at scare mongering in the style of the old “duck and cover” advice after WWII. The fun thing is that these pictures are so ambiguous they could mean anything!  Here are a few interpretations.

If you have set yourself on fire, do not run!

If you are sprayed with an unknown substance, stand and think about a cool design for a new tattoo.

Use your flashlight to lift the walls right off of you!

If you lose a contact lens during a chemical attack, do not stop to look for it. 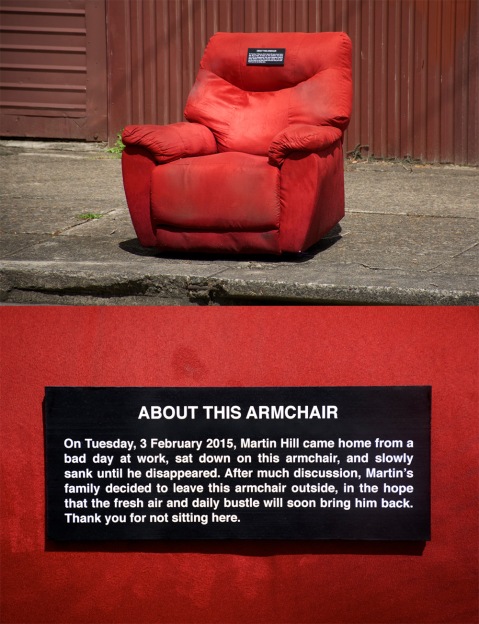 A Call for More Scientific Truth in Product Warning Labels

by Susan Hewitt and Edward Subitzky

As scientists and concerned citizens, we applaud the recent trend towards legislation that requires the prominent placing of warnings on products that present hazards to the general public. …

We are … proposing…an intensive push for new laws that will mandate the conspicuous placement of suitably informative warnings on the packaging of every product offered for sale in the United States of America. Our suggested list of warnings appears below. (selections)

WARNING: This Product Warps Space and Time in Its Vicinity.

CONSUMER NOTICE: Because of the “Uncertainty Principle,” It Is Impossible for the Consumer to Find Out at the Same Time Both Precisely Where This Product Is and How Fast It Is Moving.

ADVISORY: There is an Extremely Small but Nonzero Chance That, Through a Process Know as “Tunneling,” This Product May Spontaneously Disappear from Its Present Location and Reappear at Any Random Place in the Universe, Including Your Neighbor’s Domicile. The Manufacturer Will Not Be Responsible for Any Damages or Inconvenience That May Result.

PUBLIC NOTICE AS REQUIRED BY LAW: Any Use of This Product, in Any Manner Whatsoever, Will Increase the Amount of Disorder in the Universe. Although No Liability Is Implied Herein, the Consumer Is Warned That This Process Will Ultimately Lead to the Heat Death of the Universe.

NOTE: The Most Fundamental Particles in This Product Are Held Together by a “Gluing” Force About Which Little is Currently Known and Whose Adhesive Power Can Therefore Not Be Permanently Guaranteed.

ATTENTION: Despite Any Other Listing of Product Contents Found Hereon, the Consumer is Advised That, in Actuality, This Product Consists Of 99.9999999999% Empty Space.

IMPORTANT NOTICE TO PURCHASERS: The Entire Physical Universe, Including This Product, May One Day Collapse Back into an Infinitesimally Small Space. Should Another Universe Subsequently Re-emerge, the Existence of This Product in That Universe Cannot Be Guaranteed.

Forgiveness is not always easy. At times, it feels more painful than the wound we suffered, to forgive the one that inflicted it. And yet, there is no peace without forgiveness. Marianne Williamson

Forgiveness is the fragrance that the violet sheds on the heel that has crushed it. Mark Twain

The stupid neither forgive nor forget; the naïve forgive and forget; the wise forgive but do not forget.  Thomas Szasz