But our sukkah is still standing.  All we have to do is move it back over about 4 feet, put the s’chach (we use a bamboo mat) back in place, and put back the items I’d removed in advance of the rain (table, chairs, a few decorations).  It shouldn’t take long.  Then the sukkah should pretty closely resemble this again:

We were very lucky.  We know one family whose sukkah blew into the air, did three somersaults, and slid down the street.

Special stuff 4 days in a row (3 for Reform and in Israel): First, Shabbat Chol HaMoed Sukkot. “Chol HaMoed” refers to the days between the beginning and ending holy days of Sukkot (also Pesach).  The second scroll Torah reading varies according to which day of Chol HaMoed it is.  This year it’s the 4th (6th day of Sukkot), so the reading is Numbers 29:26 – 31 (sacrifices for Sukkot days 5 and 6).  The first scroll reading is always Exodus 33:12 – 34:26, in which Moses gets sees back the Lord’s back and then goes back up Sinai and carves two new tablets to replace those he’d smashed.  We also quickly review the Shabbat and the festival observances (34:18-26).  The haftarah is Ezekiel 38:18 – 39:16, an apocalyptic vision of the coming war of Gog and Magog; some think Ezekiel’s apocalyptic visions, or at least his interpretation of them, derived from epileptic seizures.  Chant the book of Ecclesiastes (Kohelet), attributed to Solomon in grouchy old age (“there is nothing new under the sun,” which would have eliminated my job as a patent agent).

Next, Hoshana Rabbah, which I pretty much ignored until several years ago.  This is the end of the grace period after Yom Kippur, when your fate is really, really sealed.  The Torah reading is Numbers 29:26-34 [more sacrifices].  During Sukkot, we chant prayers for salvation called Hoshanot while carrying lulav and etrog and processing around the bimah where someone is holding a Torah scroll, the synagogue.  On the seventh day, Hoshana Rabbah (the great Hoshana), there are 7 processions and sets of prayers.  Then willow branches are beaten against the floor.  My congregation has an odd custom, of unknown origin, of throwing the branches up on top of the ark.  Since we’re currently renting space from another congregation, I don’t know if that will happen this year.

The next day is Shemini Atzeret, the Eighth Day of Assembly.  Torah readings, both including [but not limited to] holiday observances, are Deuteronomy 14:22-16:17 and Numbers 29:35-30:1.  The haftarah (I Kings 8: 54–9:1 for Ashkenazim, read 8: 54-56 for Sephardim. No, I don’t know why.) describes the celebration that accompanied the dedication of Solomon’s Temple, which culminated on Shemini Atzeret.  Geshem, the prayer for rain (in Israel!) is chanted because it’s the start of Israel’s rainy season and we want normal rain at the normal time.

Lastly, Simchat Torah, which is combined with Shemini Atzeret for Reform Jews and in Israel.  We have fun both evening and morning, with 7 hakafot (parading and dancing with the Torah scrolls, even into the parking lot or street), waving paper flags, candy apples, drinking, then reading several verses from the Torah (usually from Deut. 33). My traditionally nonegalitarian congregation allows women to carry the Torah scrolls for 3 of the 7 hakafot, specifically numbers 3, 5, and 6, which end in “shi” (shli’shi, hamishi, shishi – get it?).

Originally a second day of Shemini Atzeret in the Diaspora, Simchat Torah became the day on which we read the final portion of Deuteronomy, V’zot HaBracha (“And this is the blessing”), Deut. 33:1-34:12, in which Moses blesses the Israelites, sees the Promised Land from Mount Nebo, and dies there.  In 12th century Europe, the custom was added of immediately starting over with the story of creation, Genesis 1:1-2:3.  From a third scroll, we read about we read about the Shemini Atzeret sacrifices again, Num. 29:35-30:1.

The haftarah, Joshua 1:1-18 picks up the story immediately after the end of the Torah.  Thus, on Simchat Torah, we end one annual reading cycle, start over, and move forward with the story of the nascent nation of Israel.  Endings and beginnings, round and round, every year. 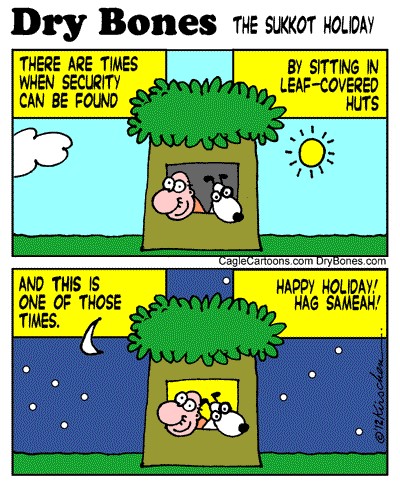 Sukkot in Polish are „kuczki”.  This site contains pictures and histories of 19th century sukkot, including a slide show of rather substantial structures attached to buildings.

(Excerpts) “What did the sukkot look like in the space of the old, 19th century Płock? In addition to wooden structures, wealthy Jews also erected brick sukkot in their properties. In the collection of the Files of the Town of Płock there were also numerous requests to the town authorities for permission to erect sukkot, which were supposed to be rather ephemeral objects – Jews were often obliged to dismantle them after the end of the holiday. In the year 1877 alone 171 such permits were issued.” 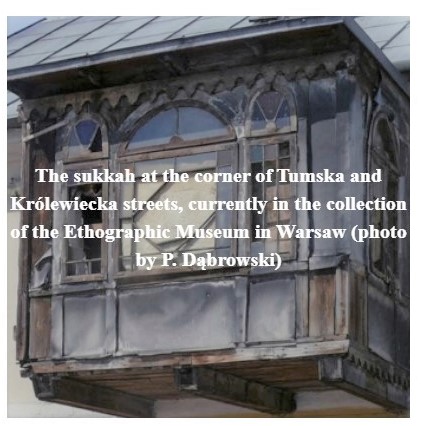 “Until recently, the most characteristic in the city space of Płock was the sukkah in the property located at the intersection of Tumska and Królewiecka streets… At the beginning of 2017, the sukkah was acquired by the Ethnographic Museum in Warsaw, which…decided to subject it to conservation and make it part of the museum exhibition. Let’s hope that soon the reconstructed sukkah from Płock will find an appropriate place in the Polish capital.”

It was raining cats and dogs, and I fell in a poodle. Charles ‘Chic’ Murray

It is best to read the weather forecast before we pray for rain. Mark Twain

You know it is summer in Ireland when the rain gets warmer. Harold Eugene ‘Hal’ Roach Sr.

A banker is a fellow who lends you his umbrella when the sun is shining, but wants it back the minute it begins to rain. Mark Twain

Nothing New Under the Sun 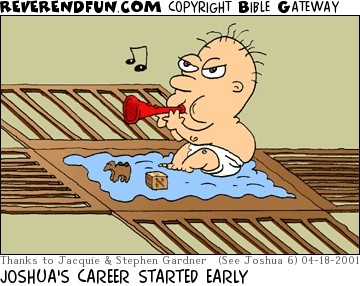 Quotes about Starting Over

There is only one day left, always starting over: it is given to us at dawn and taken away from us at dusk. Jean-Paul Sartre

What’s so fascinating and frustrating and great about life is that you’re constantly starting over, all the time, and I love that. Billy Crystal

As actors, you become an expert at starting over. Lupita Nyong’o

We in America believe in starting over – and over and over. Alissa Quart